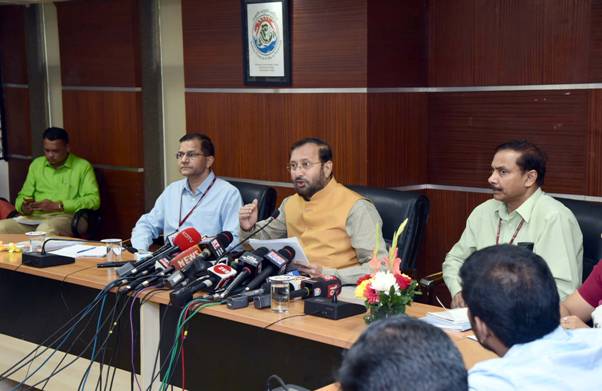 Addressing a Press Conference in New Delhi the Union Minister for Environment, Forest and Climate Change Shri Prakash Javadekar noted that efforts of the Central Pollution Control Board (CPCB) are resulting in more ‘good days’ in terms of environment in the National Capital Region of Delhi.

Javadekar said that a high level meeting of 5 States to address the problem of air pollution in Delhi, due to stubble burning will be held soon. To control stubble burning, the government has given more than 20 thousand machines to farmers in Punjab and Haryana at a cost of about Rs.1150 crore, the Minister said.

Shri Javadekar said “Recognition of existence of a problem is beginning of solution of the problem. The pollution problem of Delhi-NCR started aggravating since 2006 and was not recognized till 2014. In 2015, under the supervision of Prime Minister Shri Narendra Modi, Air Quality Index (AQI) was launched. Today, 113 AQI monitoring stations are present in Delhi-NCR and 29 more are to be installed soon”. The Minister highlighted that out of 273 days till 30th September in 2019, number of ‘Good’, ‘Satisfactory’ and ‘Moderate’ days were 165 as against 104 in 2016.

The Minister further informed that Bharat Stage Six (BS VI), is a revolutionary step in the transformation of fuels. He added that there has been 80% reduction in Particulate Matter emissions and 30% reduction in Nitrogen Oxides emissions in BS IV heavy duty diesel vehicles compared with BS III norms. Nearly ₹60,000 Cr were spent on switching over to BS VI fuels. “The Country will shift to BS VI vehicular emission norms from BS IV by April 2020. BS VI petrol/diesel is already available in Delhi/NCR”, said Shri Javadekar.

Terming the launch of green fire crackers with green logo and QR coding system as a historic initiative, the Minister advised not to burst crackers this Diwali. However if one chooses to, then opt for the green crackers which is aimed at reducing pollution and health risks, Shri Javadekar said.

The Minister also called upon other States to work unitedly in curbing pollution.  It was informed that Delhi alone gets 52MW energy from solid waste management and waste compost plant is operational. The closure of Badarpur Thermal Plant, banning of pet coke and conversion of 2789 Brick kilns in NCR to Zig-Zag technology has also led to reduction of pollution.

Underlining the various actions undertaken by the Government to control road and construction and demolition (C&D) dust, the Minister said emulating the best dust management practices from Delhi Metro has led to pollution reduction and presently there is nearly 5 lakh MT waste which is being processed as Recycled Aggregate/Brick base.

Nagaland to be part of the Himalayan Cleanup Campaign