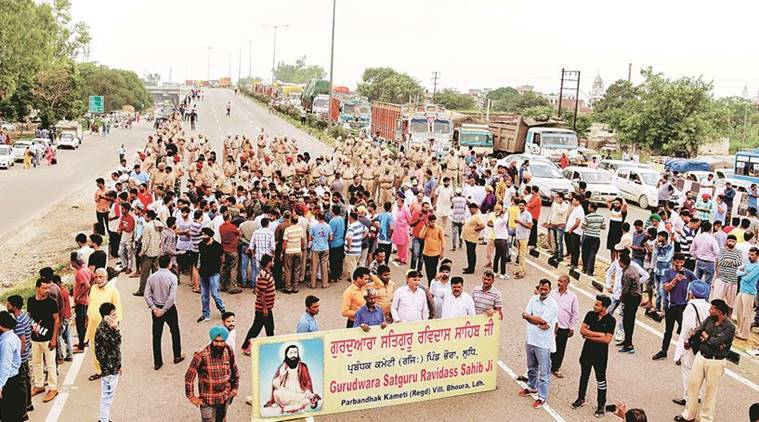 Demolition of a historic 600 years old temple dedicated to Sant Ravidas has led to major protests in Delhi. The Sant Ravidas Temple situated at Tughlakabad forest area was demolished on August 10 by the Delhi Development Authority (DDA) as per Supreme Court orders of August 9, 2019. Sant Ravidas was  a poet- mystic of the 15th and 16th centuries who has mass following in Punjab, Haryana, Rajasthan, Delhi, Uttar Pradesh, Madhya Pradesh and Maharashtra. Thousands of people gathered in Delhi to to voice their discontentment with this action. Protestors from various parts of India staged a march from Jhandewala to Ramleela Maidan shouting slogans of ‘Jai Bheem and Jai Meem’, the large procession send traffic on a regular Tizzy causing traffic jams through the areas they passed. The protestors vowed to keep up their struggle until the time the the temple is reconstructed.  “We would not rest till the temple is restored, the temple has been demolished at the orders of the central government, it is a 600 year old temple they have demolished it why? There are so many new temples which are built on government land illegally none of them are demolished but our historic Temple has been demolished” said Chhote Lal Singh, a protester from Baghpat in Uttar Pradesh.

The protestors Blame the central government for the demolition of the temple and even vandalised and posters of the leaders of the ruling party as they went on their March. The supreme court had ordered the demolition stating that ” serious breach” had been committed by the Guru Ravidas Jayanti Samaroh Samiti (GRJSS).

137 Mountain Peaks opened to foreigners for mountaineering and trekking

Would Oppose Alteration of Borders: Ramesh