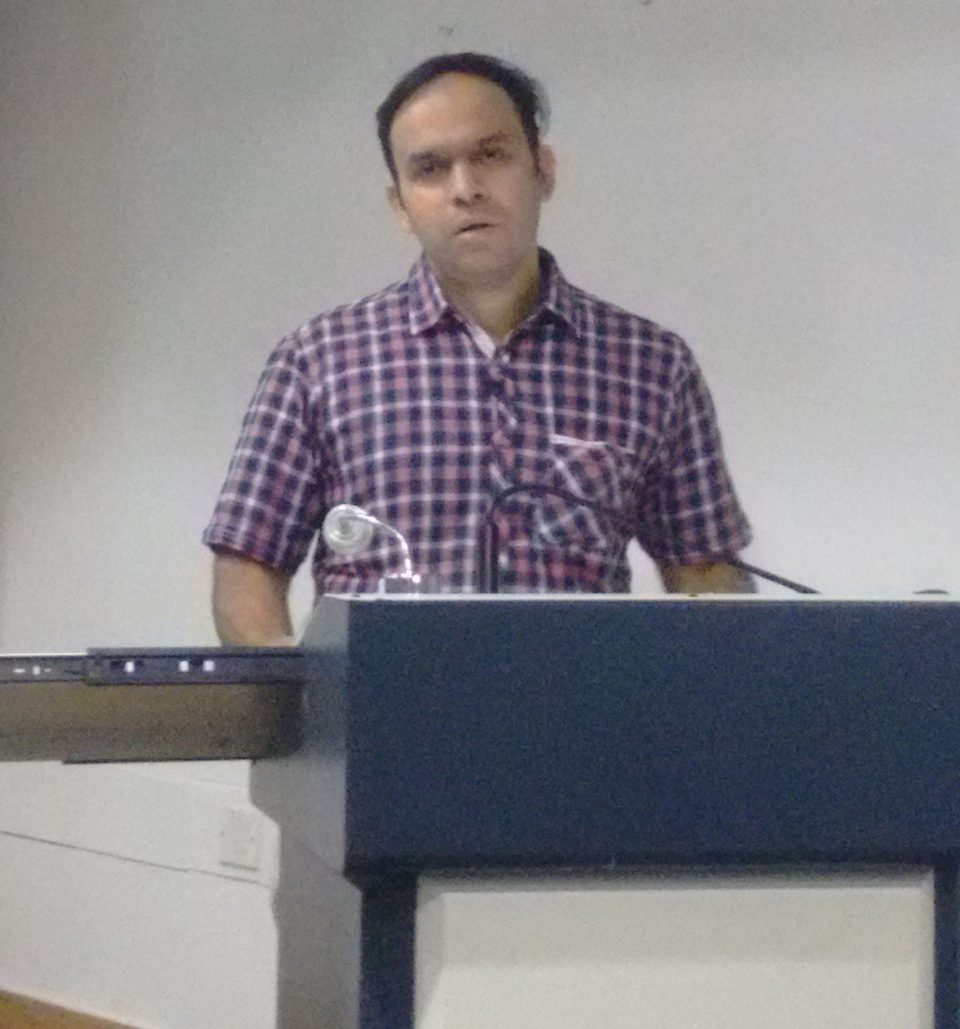 “On an average 512 people migrated from Bangladesh everyday between 1971 and 1981, between 1981 to 1991 the number was 438. However, during 1991 to 2001, the migration reached 767 persons every day while 774 persons migrated per day between 2001 and 2012 overwhelming percentage of these migrants are Hindus fleeing religious persecution. This persecution has not gone down after creation of Bangladesh but the rate is even higher now than before its liberation.” said Akshay Jog author and researcher on minority massacre in Bangladesh. He was giving a talk ‘Persecution of Hindus in Bangladesh’ organized recently by Srijan Foundation at New Delhi’s Indian National Trust for Art and Cultural Heritage (INTACH).

Jog pointed out how Bangladesh which was created in the name of Bengali identity and equality had progressively become more and more Islamic in character “constitution of Bangladesh during Sheikh Mujibur Rahman’s time included the words ‘Socialism’ and ‘Secularism’ when general Zia ur Rahman took over he inserted ‘Social justice’ and ‘unexceptional faith on Allah the Almighty’ as part of the constitution the phrase ‘bismillah ir rahman ir rahim’ was also inserted at the beginning of the constitution. In 1988 General Hussain Mohammad Irshad through the 8th amendment granted Islam the status of official state religion.”

He explained that partition itself was catastrophic for Hindus in Bangladesh as ethnic cleansing of Hindus started from the time East Pakistan came into being “Massacre and ethnic cleansing of Hindus started right from the time of partition, the so called secular leaders of India did not want to identify this as a problem but by 1950 it became so acute that even Nehru could not neglect it. India stopped coal supply to Pakistan and deployed the army along the border with Pakistan due to this pressure Pakistan negotiated and the Nehru-Liaquat Treaty was signed in 1950. The treaty proved to be futile because as many as 5 lakh Hindus and Buddhists from had crossed over to India to take refuge by 1952.”

Jog pointed out how certain Hindus who had aligned with Pakistan were quickly disillusioned when they had to live in Pakistan “Jogendra Nath Mandal was a prominent leader of schedule castes in Bengal he had formed the Bengal branch of ‘All India Scheduled Caste Federation’ and had a political alliance with Muslim League he supported the demand for Pakistan calling it an inclusive option. He stayed in Pakistan and was made the Judiciary (Law) and Labour Minister, despite that he was disillusioned by the Dalit- Muslim Alliance after witnessing the atrocities on Hindus. Mandal sent his resignation to Pakistan on 1950 and moved to India. In his resignation letter, he wrote that ‘Pakistan is cursed for Hindus’ and warned of a ‘horrifying future for Hindus in Pakistan’.”

He said that that the atrocities on Hindus became more intense during the turmoil that followed Shekh Mujib’s arrest and described how Indian government did not want to recognise it as persecution on the basis of religion “Sheikh Mujibur Rehman won the elections but was not invited to form the government and was arrested. Pakistan started to target Bengali Hindus killing and raping thousands of their women, during the the judicial trial after the war Pakistan army officers confessed to categorically targeting Hindus. During this time among all the refugees who came to India 90% were Hindus but our government kept calling it ‘atrocities on Bengali citizens’, the Indira Gandhi government concealed the fact that it was primarily Hindus who were being targeted.”

He numerated how independent, neutral observers and international bodies have been calling attention of the international community to the continued atrocities of Hindus in Bangladesh “Bangladeshi economist Prof Abul Barkat from the University of Dhaka in his book ‘Political Economy of Reforming Agriculture- Land Water bodies in Bangladesh’ says that Hindus would not exist anymore in Bangladesh in next 30 years. Bangladeshi Political thinker Ali Riaz in his book ‘God Willing: Politics of Islamism’ says 53 lakh Hindus have migrated from Bangladesh after 1971. Famous Pakistani film producer, writer and public intellectual Shahriar Kabir his book ‘An Introduction to the White Paper: 1500 Days of minority persecution in Bangladesh’ has detailed the violence on Hindus and Amnesty International researcher Abbas Faiz has categorically stated that Hindus are being targeted because of their religion.”

Afghan, US forces Eliminate over 80 Talibs